The Snare of the Devil 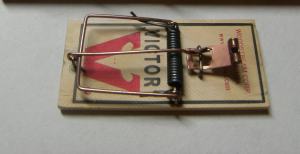 “Flee also youthful lusts: but follow righteousness, faith, charity, peace, with them that call on the Lord out of a pure heart. But foolish and unlearned questions avoid, knowing that they do gender strifes. And the servant of the Lord must not strive; but be gentle unto all men, apt to teach, patient, In meekness instructing those that oppose themselves; if God peradventure will give them repentance to the acknowledging of the truth; And that they may recover themselves out of the snare of the devil, who are taken captive by him at his will.”

The last day or two our cats had been acting a little peculiar. I noticed they were staying by the basement door as if they were waiting on something. Then the other morning I heard an awful racket as one of the cats went tearing through the house and parked by the closet. I realized then I had an unwanted guest. A mouse had invaded the basement somehow and was looking for a place to settle down. So yesterday I went to the dollar store and bought a pack of mousetraps.  Potentially four dead mice for a dollar…now that’s a bargain I don’t care how you slice it. Last night I put the peanut butter on the trap and set it for the kill. I looked down at the bottom of the basement steps this morning to find that my little intruder had taken the bait and in the process lost his life.

I was reminded that the devil is a skilled trapper. He sets snares all day every day. Many have been taken captive and many have died because they just couldn’t resist the temptation.

Proverbs 6:26 says; “For by means of a whorish woman a man is brought to a piece of bread: and the adultress will hunt for the precious life.”

A lot of precious families have been destroyed; a lot of marriages and more than a few precious homes have been broken up by the snare of what the Bible calls a “whorish woman”

Last night a 25 cent trap and a little dab of peanut butter cost a little critter his life. Everyday people throw away their “precious life” for not much more than that.

Dope, pornography, alcohol, gambling, greed and illicit sex…the devil has a trap just for you and it has the potential to ruin your life and even destroy your soul.

The snares are real and deadly.

2 Responses to The Snare of the Devil